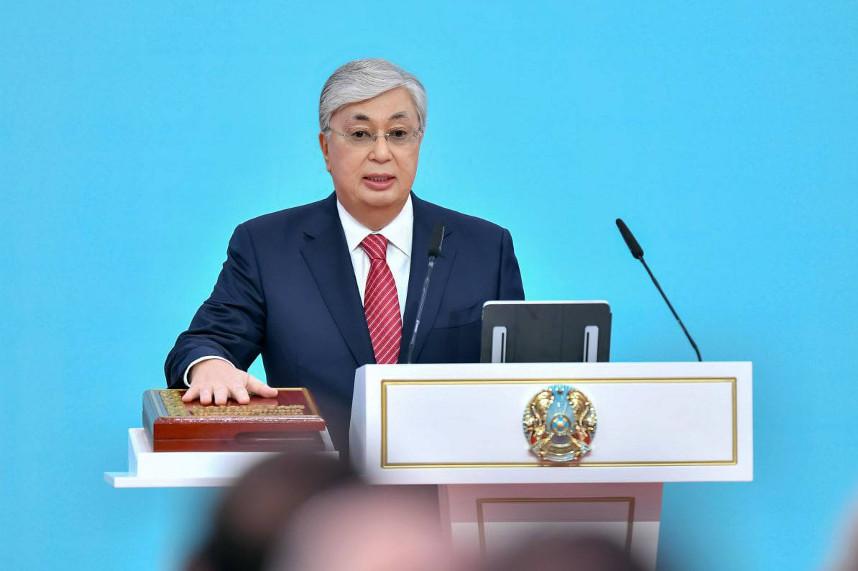 Astana – Kazakh President Kassym-Jomart Tokayev pledged to ensure political reforms, and pledged that the new reforms would include all areas of life from education to industrialisation, while defining the areas of his country’s foreign policy, stressing the continuation of a balanced and constructive foreign policy aimed at protecting national interests, and implementing all the reforms that were implemented, which aims to build fair Kazakhstan with real democratic institutions, during his swearing-in before the people of Kazakhstan, assuming the position of president and inaugurating him at the Independence Palace in the capital, Astana, this morning, “Saturday.”

The opening ceremony was attended by members of the government, deputies of parliament, members of the Constitutional Council, judges of the Supreme Court, officials of the diplomatic corps accredited to Kazakhstan, as well as other guests.

President Tokayev Emphases that he will carry out all the reforms that have been initiated aimed at renewing the branches of government and building a just Kazakhstan with truly democratic institutions, Tokayev said: “Kazakhstan is entering a new era of its development, where large-scale reforms are the basis for fundamental changes, and all spheres of state affairs have been comprehensively modernized.”

The president explained that the next common goal to build a fair and equitable Kazakhstan, where the rule of law prevails, order is maintained, and the rights of citizens are properly recognized.

President Tokayev said: “The presidential elections opened a new political season, a compressive renewal of all branches of power is set to take place, and we have a lot of work to do to transform society and Kazakhstan into a developed country with genuine democratic institutions.”

Tokayev pledged that the state policy in the future will cover all spheres of life from education to industrialisation, and said: “The basis for the long-term economic growth of our country will be new technologies, high labor productivity, and creative initiative of citizens, and that Kazakhstan will rely on workers, who are the real heroes who wake up in Early morning in the villages, standing at the factory machine, driving public transport, sitting on aircraft controllers, wearing protective gear for the guard.”

President Tokayev added: “In fair Kazakhstan, a worker should enjoy a special honour, and it is very important to raise the status of teachers, doctors, law enforcement officers, rescuers, workers and peasants to a higher level. They must become the most respected citizens of the country, and I view the election results as support for my program.” Political and trust delegation to implement the plans for the coming period.

Tokayev said: “It is a great honour and a great responsibility to lead the country with the support of the people.” High level of political culture and maturity of our society.”

On foreign policy, the President affirmed his commitment to building mutually beneficial international cooperation, including attracting foreign direct investment. He said: “Kazakhstan continues to implement a balanced and constructive foreign policy to protect national interests, and that cooperation is mutually beneficial and strategic partnership with neighbour countries – Russia, China and brotherly countries.” In Central Asia, with partners in integration alliances – is our priority, as is our desire to continue multifaceted cooperation with the United States of America, the European Union, the countries of Asia, the Middle East and Transcaucasia, as well as Kazakhstan’s commitment to follow international law and the UN Charter.

Tokayev also cited providing unrestricted business opportunities and building partnerships between the state and companies as a top priority, and stressed the importance of the rule of law in doing so, saying: “Building a fair market economy, protecting private property, developing competition, and eradicating corruption is impossible without a true rule of law.” Therefore, the equality of all before the law is a prerequisite for the long-term progress of our country.”

He outlined the areas of the country’s foreign policy during his inauguration as President of Kazakhstan, and said: “Kazakhstan will continue its balanced and constructive foreign policy aimed at protecting national interests, and that mutually beneficial cooperation and strategic partnership with neighbouring countries Russia, China, sister countries in Central Asia, and partners in international gatherings must be given priority. Kazakhstan will also work hard to develop multifaceted cooperation with the United States, the European Union, countries of Asia, the Middle East and the Caucasus, as well as interested countries.

He said: “This year has a special significance for our nation, and Kazakhstan is entering a new era in its development, and large-scale transformations have begun to bring about profound changes, and thanks to these changes, people’s faith in a bright future is strengthened, which I was convinced of during my visits to the regions and my meetings with people, as he showed Last referendum overwhelming support for new initiatives. The Kazakh president said that the quest of the Kazakh people for positive changes gave a strong impetus to our work.

He went on to say that the reforms will be fully implemented. According to the new constitutional norms, the president is elected for a seven-year term, opening the way for a new generation of politicians to come to power.

Tokayev won the presidential election, according to the final results of the Central Election Commission announced on November 22.